Location and Neighborhood
Discover in the vicinity of your villa. Taman Ayun Temple, the local market, rice fields and much more... 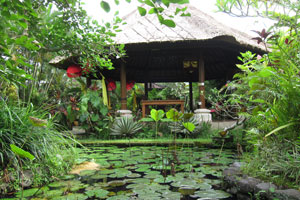 Experience the original Bali. The three bungalows, accommodating a maximum 8 persons, are set amidst a beautiful rice field scenery. We offer comfort in a village environment, very well located in central Bali, not to far away from major tourist attractions, shopping and dining area.
Located 18 km north of the capital Denpasar, some 30 minutes drive from the artist village of Ubud and 25 minutes from the famous sea temple of Tanah Lot.
Within walking distance of the Royal Taman Ayun Temple in Mengwi. This temple has been included, since 2010, as a UNESCO World Heritage Site. It is one of the most beautiful temple complexes in Bali. Nearby you will find a local Market, an Ogoh Ogoh (giant paper-mache figures) Museum, some shops and a small supermarket, as well as an ATM machine and the Gladiator Fitness center. . 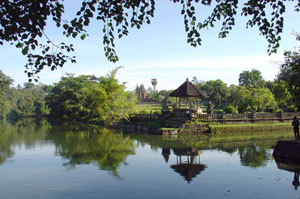 The name Taman Ayun means "beautiful garden" or "nice park". The temple complex was built in 1634 as the family temple of the royal house of Mengwi and is one of the most beautiful in Bali. Surrounded by a large moat, symbolizing the oceans and a small moat symbolizing the district of the gods, the temple stands as an example of micro-macrocosm. The temple houses the famous lean "Merus" gods shrines for all the major deities of Bali. 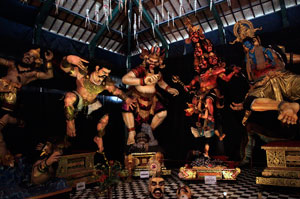 This very unique museum displays the giant papier-mâché figures Ogoh Ogoh. Ogoh ogoh statues are crafted for weeks from the village youth in great fervor and built for the Ngrupuk parade, that takes place on the eve of Nyepi day. Ogoh ogoh usually depict mythical creatures and demons of the Hindu culture and there stands on a base of bamboo board. On the evening of the parade the Ogoh-ogoh figures are carried along the main road with lots of noise and torchlight procession through the village and to be judged by a jury. This is a must see. No one leaves disappointed. 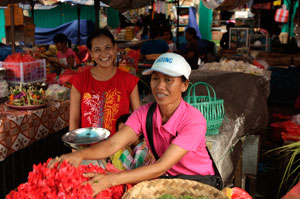 Mengwi, due to its central location during an earlier period, is an important transit point for goods from the hinterland. The local market does a brisk business around the clock. Both in the early dawn and late night, you will find a buzz of activity to observe. All the goods for your daily needs as well as colorful offerings and flowers are for sale. In the market area, there are also numerous food stalls where the locals like to buy their meals. Not very far from the main market, there are several craft shops of colorful Bali umbrellas. 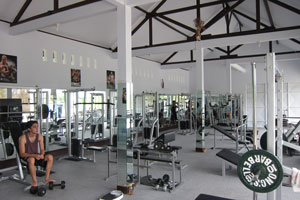 Gladiator Fitness was opened in May 2013 and offers enough devices for your physical training. There are plenty devices for muscle training as well as a treadmill and an exercise bike available. Two bath rooms, toilets, a large lounge with seating, a juice bar and a large car park complement the spacious facility. 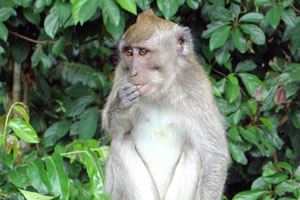 The forest consists of huge, over 50 meters high Pala-nut trees, "Pohon Pala" called, which grow only in this one place in Bali. The forest is inhabited by little macaque monkeys, a few hundred in number. The animals live freely there, but are fed by the local population and considered as holy temple guards. The fruits are often nibbled from apes to find worms in the nuts. The "nuts" of trees are collected from local residents to produce the resin of incense bowl. This so-called "Monkey Forest Sangeh" is also a popular destination for the local population. 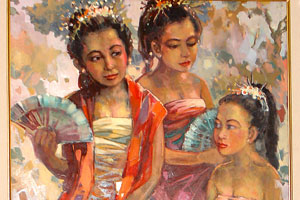 Famous artists village in central Bali, where already in the 30s well-known artists from around the world lived. The German painter Water Spies and Dutch painter Rudolf Bonnet shaped the development of Bali painting considerably. The former home of Walter Spies is in of today Tjambuhan hotel.
The Museum Puri Lukisan, Neka Museum, Agung Raka, Antonio Blanko and Rudana Museum are well worth seeing.
Today Ubud gets many visitors browsing through the extensive range of the countless shops and galleries.
A great place for souvenir shopping. 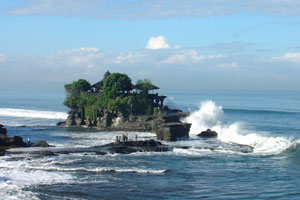 The name Tanah Lot means "Land in the Sea" and is derived from the words "Tanah" for land or earth and "lot" means sea. The from Java coming famous Hindu priest Danghyang Niratha gave the instructions in the 15th Century to build a temple on a rock formation for defense against demons from the south. Originally the place was probably a place to worship the serpent deity Basuki, the temple is in some registers as one of the 6 most important temples in Bali. Black and white striped sea snakes (Laticauda semifasciata) are worshiped as sacred Temple Guardians in the caves around the temple. The temple can be reached at low tide, but is only open on ceremony days. In the evening, crowds of visitors gather to capture a sunset photo. 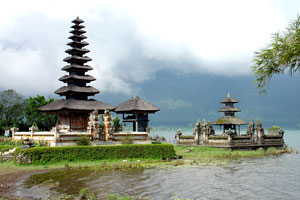 Is the well known name for the cooler mountain region of Bali, located at 1200 meters, on the main road from Denpasar toward the old capital of Singaraja. Today, most visitors stop at the colorful vegetable fruit and flower market of Candikunig. A true hub for the fruit and vegetable supply of the island and a colorful photo setting.

Pura Ulun Danu Temple - Bratan
The lake temple was built by the Mengwi royal house and is dedicated to the goddess of the sea and the mountain lakes Dewi Danu. The temple sits on the shore, not far from where there are two shrines built in the water, one with three roofs on the Meru for Dewi Danu and one with eleven roofs on the Meru for Manu. The Lake Bratan on which the Ulun Danu Temple lies, is the second largest in Bali and is regarded as a symbolic water reservoir. Every year, the temple ceremonies held to Devi Danu pay homage and ask for enough water for rice field irrigation.