About Bali
...a short overlook

Bali is located in the area of the small Sunda Islands, eight degrees south of the equator, surrounded by the Indian Ocean and the Sunda sea. The area is 5561 square kilometers, the extension from west to east 145 km from north to south, 95 km away. Bali is crossed by volcanic mountains, the highest mountain is Gunung Agung 3,142 meters. Throughout the year there is a paradisiacal climate with temperatures between 20 and 33 degrees. 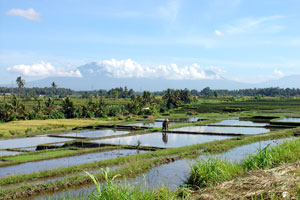 There is plenty of water for wet rice cultivation. The Balinese rice goddess Dewi Sri created a beautiful landscape, so this goddess of fertility care in their benevolence for food and prosperity of the people.

The rainy season lasts from November to March. It then rains usually only locally, often several times a day for a short time. The water is very cleverly controlled by the farmers and into the rice fields.

The religion came in the 8th century from India via Java on the island and mingled with the local ancestor worship. Bali Hindu or Hindu Dharma, as the religion is called, is a mixture of Hinduism, Buddhism and ancestor - worship and soul. 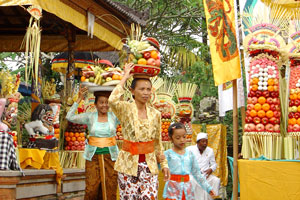 Many ceremonies and celebrations determine the life of the Balinese. Daily offerings are designed in various places in small palm leaf bowls with incense to make good with the gods and demons. The island is covered with numerous small and large temples, where after the bali between calendar cycle over the whole year ceremonies are held.

The main religious festivals are Galungan and Kuningan, 10 days later the day. The Hindu New Year , Nyepi comes from India, is celebrated only in Bali in this form, according to the lunar calendar, usually in March. 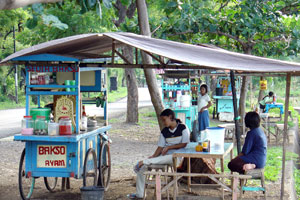 As local food to get in any restaurant, you should try Nasi Goreng (fried rice), Mie Goreng (fried noodles) or Sate (chicken, pork or beef skewer). As a national drink water, coffee and tea are. Alcohol is very rarely drunk by the Balinese. Tuak, a palm wine, which is to get more in the countryside than in restaurants, arrack, rice wine and Brem Bali rice wine are somewhat peculiar in taste.

Daily life in Bali is marked by many influences - history, religion, art, village community and a lush, tropical landscape. All these elements are intertwined by the Baliern in their daily lives inextricably.

Difficult to understand for the visitor who tends much to be considered separately - Maybe just acts , therefore, the island of Bali so fascinating. 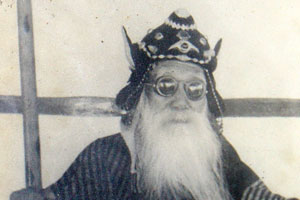 About the history of Bali is until 8 Century AD few survived. There is probably enough stories and village tales, but no written documentation. The Hindu Javanese priest brought to the island at the site of today's Mother Temple of Besakih is the first place of worship have been built. Of great importance in earlier times was the worship of nature gods, and rice cultivation played a major role. As early as 1000 AD. the first rice terraces were created, all dug by hand and coated with a very thoughtful irrigation system. Devi Sri, the goddess of fertility, whose lives soul in the rice plant is worshiped to this day.

The country was ruled by various small principalities, and the farmers had to pay their tribute.
Bali was at different times under the direct influence of its larger neighboring island of Java. Javanese kings conquered Bali, marriages strengthened alliances.
When the Islamic influence on Java increased, the Hindu Majapahit Empire lost more and more important. 1478 the son of this last Indo-Javanese king fled to Bali, courtiers, priests and scholars followed him to Gelgel, near present-day Klungkung in East Bali, where he became the Dewa Agung, great ruler, crowned. 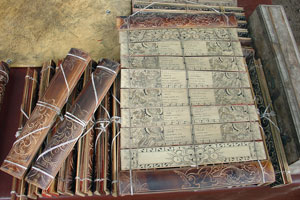 Bali as a small island in the Indonesian archipelago and for the spice trade without significant wealth was for the Dutch colonial economy long not interesting. Only when the Dutchman wanted to join their East Indian colonies to form a whole, they tried to subdue Bali. The proud residents, especially of southern Bali, these attempts, however, steadfastly ignored.

1848, the North of Bali was conquered. When in 1906 the colonial power with a superior number of soldiers in Sanur went ashore and marched against the capital of Badung, the Rajah chose from Badung (Denpasar) instead of colonial rule, the voluntary ritual death (Puputan). Thousands members of the royals and residents were killed. Tabanan and Klungkung in 1908 followed the heroic example. As the Dutch public of this terrible Puputan heard she reacted with horror. Bali was awarded a special status in 1918 even joined a law to protect Bali from foreign exploitation in force.

During the Second World War, the Japanese took control.
On 17 August 1945, the first President Sukarno proclaimed Indonesia's independence, but this was only in 1949 recognized internationally.
Bali is ruled at one of the 27 provinces of Indonesia by a governor with headquarters in Denpasar.

A history there has never been in the chronological sense, much more has been and is today still told in various dance and shadow play performances. A mixture of historically has been handed down and other current events listed for religious ceremonies. 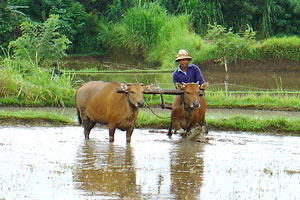 Bali is one next to the island of Java to the densely populated areas of the Earth. In Bali covers an area of 5561 square kilometers 4 million people. This gives a population density of 720 people per Square kilometer. In Java (128,000 sq km) live in an area almost as large as Austria and Switzerland to the 130 million people. A huge demand for food, which is covered by wet rice. The Balinese was also happy recruited to build the rice crop on other islands. Unique in Bali is the Subak rice field Cooperative, which controls the whole process of rice cultivation.
Today the fields are all privately owned, but are subject to the Subak. A field above is responsible for the irrigation of the fields below. Would be rezoned near the village land in a field, at least half a meter wide strip of land to water passage to the Subak must be assigned. It is the principle of life and letting life.

To view the progress of rice planting we start after the harvest. A field is flooded and then plowed in it's wet, soggy state. Today you can find in the fields often what is called the "Japanese cow ", a rice field tractor. Otherwise, water buffalo or cattle are used. In the mountains, the terraces are very narrow not even a cow or buffalo can maneuver through. So the farmers have no other option than to dig with a hoe. Subsequently, the field will be smoothed out and then they press clay embankments firmly. 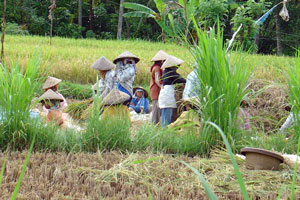 During this time, a small patch of land is reserved and seed is placed on it. The grains begin to sprout and grow small plantlets that look like young grass. These seedlings are taken out in clumps and inserted by hand, never more than three to five together and separated by a distance of about 20 cm.
Then comes the quiet time on the rice field, some weeding and fertilizing work is done until shortly before harvest, the field is dried and will be harvested after a few weeks. The water is diverted into the so-called drainage rivers or canals, and 20 to 30 km further you start to re-use it in the fields. Thus, the water saving and diversion are very useful. 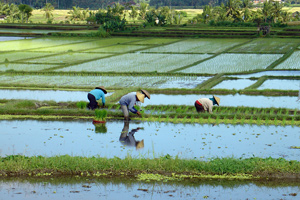 For the harvest an entire patch is cut with a sickle and immediately hand threshed on site that same day. In the lowlands, due to the high use of hybrid rice too many grains of rice would otherwise fall off the ears, if not threshed . In the mountains you still using an ancient instrument for the rice harvest, called Ani -Ani knife. Thus, each ear is cut individually. The Balinese say, the holy rice plant does not want to see the instrument used when it is to be cut and thus killed. Very gently, with the knife hidden in the palm of his hand, each ear is cut.

It can be very profitable. In Indonesia hybrid rice can bring 3-4 harvests in about 14 months with a yield of 6 to 8 metric tonnes per hectare. There are several white hybrid rice varieties, Bali mountain rice, black rice (for sweet rice pudding), red-brown for a medicinal tea, a milky white rice grain rice flour (glass noodles, countless Bali rice cake) and a red-brown, each good tasting and with a unique flavor to be enjoyed within a recipe to be used with.